The Tuanku Mizan Zainal Abidin Mosque, or Iron Mosque (Malay: Masjid Tuanku Mizan Zainal Abidin or Masjid Besi) is the second principal mosque in Putrajaya, Malaysia after Putra Mosque. It is located in Putrajaya’s Precinct 3, opposite the Palace of Justice. Construction began since April 2004 and was fully completed on August 2009. It was officially opened by the 13th Yang di-Pertuan Agong, Tuanku Mizan Zainal Abidin on June 11, 2010.[2]The mosque was built to cater to approximately 24,000 residents including the government servants working around the city center as well as areas within Precincts 2, 3, 4 and 18. Tuanku Mizan Zainal Abidin Mosque’s area is twice that of Putra Mosque, which is located 2.2 kilometers north.The “Iron Mosque” features a district cooling system, and fans or an air conditioning system. The mosque employs “architectural wire mesh” imported from Germany and China, which is also constructed at the Santiago Bernabéu Stadium in Madrid and the Bibliothèque nationale de France in Paris. The main entrance is strengthened with glass reinforced concrete to increase the integrity of the structure and uses fine glass to create an illusion of a white mosque from afar.

The path towards the mosque crosses a skyway known as the Kiblat Walk which stretches an area of 13,639 m². This skyway contains landscaping adapted from the ancient castles of Alhambra. The interior is decorated with Al-Asmaul-Husna calligraphy of the Thuluth variation. The entrance to the main prayer hall is adorned with verse 80 of Sura Al-Isra from the Qur’an.
There is a mihrab wall made of 13-meter-high glass panel imported from Germany inscribed with two verses from Sura Al-Baqarah on the right and Sura Ibrahim on the left. The mihrab wall is designed so that no light will be reflected, creating an illusion that the verses are floating on air. The 40-feet-long edges of the mosque’s roof are able to shelter the people praying outside of the main prayer hall from rain

Wicked tongues compare Putrajaya, the ultra-modern administrative centre in the southwest of Malaysia, to a Disneyland for civil servants. The planned city for 90,000 inhabitants was created in 1995 about 30 km south of the capital Kuala Lumpur. The sprawling satellite city, named after the first Prime Minister of the country, Tunku Abdul Rahman Putra, forges nature and technology into great forms of architectural expression. It is no coincidence that the last word jaya means perfection. The approach in Putrajaya is reflected in prime examples of Malaysian Islamic prestigious buildings, scenic parks, artificial lakes and waterways. Following an unspoken master plan the city combines both historic and national structural styles with ultra-modern materials. In addition to the Istana Melawati royal palace and the 68-metre high, pillar-shaped Millennium Monument, the Putra Mosque, with its 116-metre high minaret – the highest in the whole of Southeast Asia – ranks as one of the must-see tourist sights. However the Tuanku Mizan Zainal Abidin Mosque is the prominent landmark in the new seat of government. Built right next to the Millennium Monument at Putra Lake, the sacred building known colloquially as the Iron Mosque proclaims the presence and strength of Islam. The unique cooling system, which rendered air-conditioning and fans superfluous thanks to GKD’s Escale stainless steel mesh, lends the building its special atmospheric quality. What’s more, the semi-transparent spiral mesh provides worshippers with reliable protection from the sun and rain.Fabric windows
With the completion of the second main mosque in Putrajaya, the Tuanku Mizan Zainal Abidin Mosque, located just two kilometres from the Putra Mosque, the city gained a new landmark. Larger, more modern and considerably different from the usual design, the Iron Mosque sets contemporary standards. It owes its name to a structure 70% of which is made from steel. The aim of the planners and contractors was for the building to characterise three design principles: simplicity, airiness and transparency. A good five years after the start of construction in April 2005, the finished mosque is now a potent symbol of religious identity. A modern interpretation of Islamic architecture, its 24m-high facade characterises a purist steel structure with typical geometric ornamentation. The rectangular openings of the meandering structure are visually connected by a filigree facade made from 4,300 m2 of stainless steel spiral mesh. Each mesh element is 7.70 m wide and up to 8.30 m long. Three of these elements each were joined together on site, with the result that they rise with the height of the facade and windows in an optically seamless manner. Secured almost invisibly using hook bolts, they express the building contractors’ desire for simplicity, transparency and an openness to dialogue. Depending on where you are standing and where the light is falling, the fabric mantle has a semi-transparent/opaque or a metallic, shimmering or even a monochrome, light-grey appearance. Projecting shadowy outlines, they reflect mankind and nature in its environment, distinctively conveying to the outside world the harmony of co-existence, which is also represented inside the mosque by the common prayer. At night purposefully staged lighting brings the transparency to life in a burst of illumination.Natural air-conditioning 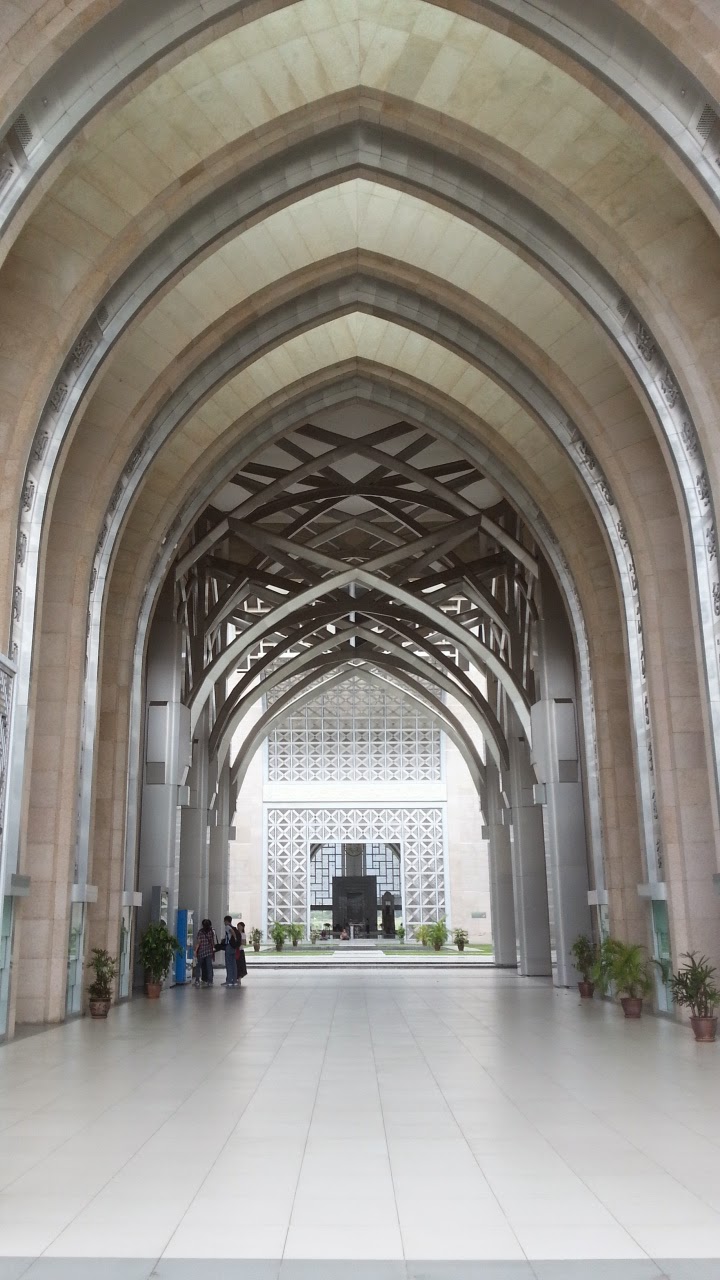 In addition to this symbolic appearance, the robust, maintenance-free mesh also fulfils extremely complex technical functions. The plans of architect Nik Arshad Nik Mohammed made provision for natural air-conditioning in the main prayer hall, which offers space for 20,000 worshippers. In his draft he did away with glass windows and developed the idea of a mesh skin acting as a protective membrane. The prevailing tropical climate in Malaysia with high temperatures all year round and heavy rainfall in spring and autumn proved a particular challenge in terms of finding a suitable material: the Escale 7×1 spiral mesh from GKD – Gebr. Kufferath AG – met the high demands for both transparency and technology at the same time. Corrosion and heat-proof, easy to maintain, non-flammable and resistant to mechanical influences, the stainless steel mesh was chosen primarily for its almost unlimited service life and low life-cycle costs. However, what was crucial in terms of its use was the laminating effect of the mesh, thereby protecting against drafts while at the same time letting the cooling wind penetrate the whole building as a pleasantly even flow. In this way comfortable, natural air-conditioning which renders the use of air-conditioning systems and fans superfluous, is created throughout the mosque. Due to the window openings spread across the whole height of the facade, the mesh is proving an effective means of protection against sun and rain. At the same time the transparent woven structure, together with the soft radiance of daylight, underlines the meditative atmosphere in the mosque.Contemporary identity
In any culture designing places of worship is one of the most challenging tasks in architecture. Combining the aesthetic with spirituality transforms them into socially relevant buildings. Mosques, unlike Christian churches, are not a house of God, rather they are multifunctional meeting places with no standard formal canon. The only essential element for worshippers is the Qibla, a wall of prayer which faces the precise direction of Mecca. The sacrality of the building comes into being through the common prayer. As a place of prayer, learning and teaching, the Iron Mosque in Putrajaya combines traditional religiousness with a contemporary sense of identity. With its own design vocabulary and functional aesthetic it is already considered a masterpiece in the balance between nostalgia and modernism.
Posted in Putrajaya