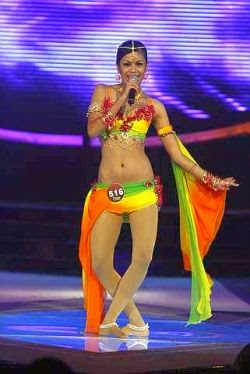 Catherine Yee Yean San (余豔姗) is 22-year-old (2010), Yee, who was schooled in Malaysia up to Form Five, is fluent only in Mandarin. While she understands Cantonese and Hokkien, she prefers to converse in Mandarin – her mother tongue.

With a Chinese name, her striking looks and mixed parentage are always a source of curiosity among people. But Yee readily addresses the subject when asked about it.

Catherine Yee Yean San steps on stage to belt out a Hokkien number, people will be captivated not only by her singing and dance moves but her comely appearance and Indian looks as well.

Although it isn’t unusual to find Indians singing in Hokkien (like the Muar-born recording artiste Xiaohei – real name Raju Kumara Suppiah – who sings in Hokkien and Mandarin), Yee still attracts a lot of attention whenever she performs as she is also a skilful dancer who choreographs her own shows. Her penchant for colourful, sexy attire, too, renders her quite a sight on stage.

The getai (street concert) entertainer received regional recognition earlier this month when she was crowned the champion at the 3rd World Min Nan Singing Competition held at the Arena of Stars in Genting Highlands. (First runner-up was Taiwanese Zhang Wen Qi while Lin Ya of China emerged third.) 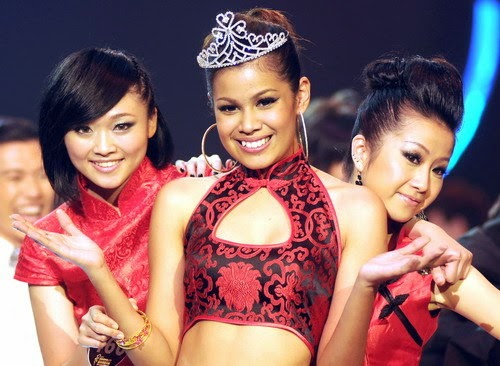 This year, Yee, who sang Qiung Xia (Sound of Gun), beat 50 contestants from Malaysia, China, Taiwan and Indonesia to the top placing and RMB30,000 (RM15,000) despite being down with the flu on the big night.

Catherine Yee Yean San never expected to win. The other contestants were very good. I think my dancing made a difference. My getai experience, too, was a major boost the cheerful 22-year-old who obtained her ticket to the competition after successfully auditioning for Astro Hua Hee Dai’s Hokkien reality TV singing show, Hua Hee Karaoke, last August.

Like many professional stage performers, Yee boasts a remarkably diverse repertoire. She sings in seven languages and dialects. Apart from Hokkien, she also does popular hits in Mandarin, Cantonese, Teochew, Thai, Malay and English. 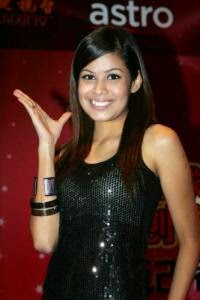 “I’m quite used to people asking me these questions. It’s all right with me,” the pretty singer said during our meeting in Petaling Street, Kuala Lumpur, where she was filming a Chinese New Year special for Hua Hee Dai. The programme will be aired on Astro Channel 333 on Sunday, Feb 21, at 9.30pm.

Born to a Chinese father and Indian mother, Yee was given up for adoption by her impoverished family who could not cope with raising the child. She ended up being adopted by a childless couple.
“I was brought to my parents’ home three days after my birth. They are very loving and encouraging, and have always treated me as their own,” Yee said, adding that her adoptive parents – father Yee
Mee Keong, who’s a mechanic, and homemaker mother Chua Lee Kung – are supportive of her work as an entertainer.