The Purportedly the largest rooftop garden in South East Asia

There is a huge garden at the rooftop of 1 Utama shopping centre called Secret Garden.

Purportedly the largest rooftop garden in South-East Asia, it was a best kept secret for five years until it was opened to the public in 2009.

With an elevated location, it is little wonder that development of the Secret Garden took so long although ‘ award-winning botanist Dr Francis Ng was the person engaged to build and manage it.
This Secret Garden has a secret to overcoming the challenge of having no underground Water, It is called biochar, which are small particles of charcoal.

“It was something totally new, so we had to do a lot of experiments in getting the condition right. 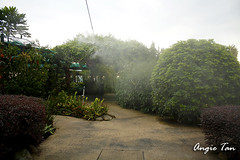 “Not only is it too heavy for rooftop planting, the soil is too compact for root growth in an environment Where the plants cannot absorb Water from the ground,” explained Ng.
The use of charcoal solves­ the problem. The charcoal mixture is only half of the weight of soil, it is porous enough for good penetration of ‘ water and oxygen that promotes root growth.

Ng also painstakingly adjusted the charcoal mixtures proportions to create the best condition for a variety of plants.

Such bold and wide use of biochar is unprecedented, said. Ng, .

“There is an international movement to use charcoal in agriculture as a way to fight climate change and improve soil productivity, but even they do not use more than 10% charcoal in the mixture,” he said.

“When some of the representatives were brought here to visit this garden, they were blown away as we actually use purse charcoal in some zones! “he enthused.

Ng said they were also trying. to produce their own charcoals using trees that are removed from township, but were concerned about smoke emission that would invite residents’ complaints.

He said the only setback of using charcoal is-that it dried out water quickly, so the irrigation had to be extra good.

This is rectified by making use of cold water discharged from the shopping’s centre’s air-conditioning system.

The cold water is especially useful for the temperate garden, judging from the beautiful blooms of hydrangeas, lily magnolias and roses there.

In the cosy and romantic charm of a Victorian garden, the Secret Garden is thoughtfully landscaped so that the experience is both pleasing and educational.

Even though Ng said sourcing of  the plants was not difficult, he nevertheless made many eager visits to nurseries  to look for new and rare species to make the garden as informative as possible.

First to greet visitors at the walk through garden are accent plants that command admiration instantly with their distinctive Shapes, hence used widely to complement buildings.

Then stroll through  cactus, foliage plants and flowering trees that mesmerise with burst of colours, and enjoy the breeze wafting through luxuriant climbers and swaying aerial roots.

Amazon water lilies take one’s breath away while idling on the pond, blooms from osmanthus trees and other temperate plants grab attention with their whiffs of fragrance.

Do see how much Mother Nature loves us from the wide range of foods she has created for us.

Herbs, spices and food plants including tea, coffee, cocoa and even paddy grow in abundance in this garden.

A huge pergola is erected in the centre of the garden, it is where classes are conducted.

Ng goes to the Secret Garden twice a week to check on every thing.

Trimming and replacement of diseased or drooping stems are done all the time. He is also working out ways to eliminate space where weed can grow.

“Gardening form of art that never ends,” he said.

The Secret Garden is for everyone enjoyment. It open on and public holidays for
free, from 10am to 10pm. 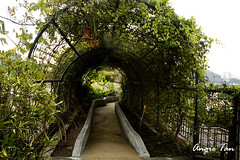